The 9 most interesting golf equipment stories of 2019

Any time a year comes to its conclusion it offers the opportunity to reflect on what occurred over the preceding 12 months. As it relates to the golf equipment scene on the professional tours, 2019 had no shortage of newsworthy stories. Hot drivers and the methods used to test them continued to be a controversial topic, specifically at the Open Championship where there was a visible split between some tour players and the governing bodies over the protocols used. Spicy drivers, however, were only a fraction of the equipment news. Players breaking clubs, losing clubs, using too many golf balls or not having enough of them caused confusion and consternation among those involved. And then there were the numerous equipment escapades of the “Golf Scientist,” Bryson DeChambeau. With that, here’s a look at our top golf equipment stories of 2019.

Driver testing at the Open Championship
Driver testing is a behind-the-scenes process that is usually a non-event. That changed when a handful of the 30 players who had their clubs tested prior to the Open Championship at Royal Portrush in July saw some fail the test. Among those players was Xander Schauffele, who went public with his displeasure at the process. Schauffele’s beef that it was selective and needed more discretion was legitimate, but the testing brought to light the fact that some drivers being used on tour that were originally “legal” were unintentionally becoming nonconforming over time due to usage. Soon thereafter the PGA Tour implemented mandatory driver testing at several events, with a few drivers caught speeding at the Safeway Open. To what extent there is an issue remains to be seen, but it’s a story to follow in 2020.

Bryson DeChambeau’s many changes
You can’t have a list of top equipment stories without Bryson DeChambeau. Normally known for having all his irons the length of a 7-iron, DeChambeau became more focused on other aspects of his equipment in 2019. At the WGC-Mexico Championship, DeChambeau changed to Bridgestone’s Tour B XS ball and waxed on about the effect of atmospheric conditions on a golf ball. Prior to the Masters, he changed all the shafts in his irons and wedges. Later in the year, at the Shriners Hospitals for Children Open, he put graphite shafts in all 14 clubs, which is believed to be a first for a PGA Tour player. Finally, at the Hero World Challenge, DeChambeau put into play a 4.8-degree driver. And what about the One Length irons? They hardly got a mention with everything else going on.

Eddie Pepperell running out of golf balls
OK, we’ve all been there. Out on the course enduring a rough patch and worrying about running out of ammo. Heck, Tiger Woods nearly did it at the 2000 U.S. Open. Unfortunately for Eddie Pepperell, the worst fears actually came true during the third round of the Turkish Airlines Open in November. In rapid fashion, Pepperell launched balls into a pond until his bag was empty, and he was ultimately disqualified. Said playing companion Martin Kaymer, “Eddie hit his shots to the green, then came over to tell us he had run out of balls. He did not ask if he could borrow one [allowable if the same model]. It did not look like he wanted to play. He did not putt with his putter on the third hole; he putted with a wedge. So there was a lot happening. I have never seen anything like that before. I only watched it on television, in ‘Tin Cup.’ This is the first time I have seen it live.” Us, too.

Russell Henley runs afoul of the one-ball rule
While Pepperell was DQ’d for not having enough golf balls, Russell Henley got an eight-stroke penalty for using too many. After the second round of the Mayakoba Golf Classic in October, Henley dug into his bag to get a few balls to sign and hand out to fans. In doing so, he noticed he had accidentally used a ball other than a Titleist Pro V1x during his round—a no-no under the PGA Tour’s one-ball rule that requires a player use the same make and model of ball throughout a round. Henley went to a rules official and explained he had used the different ball for four holes. The penalty: two strokes for each hole, turning his 69 into a 77 and a missed cut.

Steve Stricker’s venerable sticks, unusual endorsement deal
Steve Stricker went back in time—in golf equipment terms, way back in time—in putting his old Titleist 755 Forged irons, a set that debuted in 2006, in the bag at the Memorial. Stricker used the clubs a few weeks later to win the U.S. Senior Open, saying, “I’ve been trying to find some clubs and equipment that I like, and so I went back to an old set that feels really good. That’s part of it, too, I think. I’m swinging at it a little bit more confidently, feeling good with what I have in my hand.” Stricker’s putter is a golf artifact as well, an Odyssey White Hot 2 he first played at the 2006 Shell Houston Open. Two days after winning the Senior Open, Stricker signed one of the most unusual endorsement deals in golf with Odyssey. The pact called for no signage on his hat, bag or anywhere for that matter. Just that he continue to use a putter nearly 15 years old, which is right up his alley.

Harold Varner busted for assembling his driver on course
Harold Varner’s Players Championship got off to a rough start when, prior to his opening round, his driver cracked on the practice range. As such, Varner started his round with 13 clubs and intended to have another driver brought out to him, allowable under the rules. But Varner wanted to use the same shaft that was in his gamer. This too is allowable so long as the assembly of the club takes place off the course. That’s where things went wrong. After leaving the shaft back at the tee, hoping to have his agent pick it up and assemble the club before bringing it out to him, a walking scorer took the shaft out to Varner on the course. When the driver head was brought out, too, the club was assembled on the course in violation of the rule, costing Varner a two-shot penalty.

RELATED: Golf World’s Newsmakers of the Year for 2019

Tommy Fleetwod’s eBay bargain putter
Like most golfers going through a rough stretch on the greens, Tommy Fleetwood was ready for a putter change at the Omega European Masters in September. The new putter, however, turned out to be an old putter that his caddie, Ian Finnis, purchased off eBay for £90 ($109) in January. It was a birthday gift for Fleetwood, who used a similar model growing up. Fleetwood put the Odyssey DFX 2-Ball Blade in play and needed just 21 putts in the opening round. He continued to play well the rest of the week, finishing T-8 to earn the equivalent of £45,674—a pretty good return on Finnis’ original investment.

Patrick Reed snapping wedge over his knee at the U.S. Open
Varner’s broken driver was an accident. Patrick Reed’s demolition of a wedge at the U.S. Open was intentional for all the world to see. On the final hole of his second round at Pebble Beach, Reed hit a pitch shot long from behind the green then flubbed his next shot. That’s when Reed went full Bo Jackson (or Henrik Stenson) and snapped the shaft of the wedge over his knee. Reed somehow went on to get the next shot close enough to make the putt for double bogey and make the cut, but he needed a new wedge for the weekend.

Patrick Reed snaps his club over his leg on No. 18… 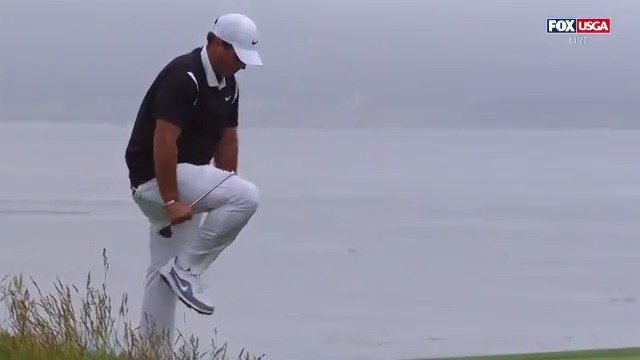 349 people are talking about this

Lost clubs of LPGA Tour players
It was a rough year for the transport of clubs used by LPGA Tour players. In February, en route to the Honda LPGA in Thailand, a number of players including Paula Creamer, Sandra Gal, Jodi Ewart Shadoff and Brittany Lincicome had their sticks fail to get to their destination on a Cathay Pacific flight. In March, In-Kyung Kim learned her missing clubs were actually up for sale on eBay after supposedly being lost on an American Airlines flight. In July, Ryann O’Toole’s clubs failed to make it to France for the Evian Championship. When pleading her case to a British Airways agent, the agent ignorantly asked, “Can’t you just use a rental set?” And in September, two Solheim Cup players, Angel Yin and Shadoff (tough year for her) had airlines lose their fully-loaded travel bags. Luckily all the players were eventually reunited with their clubs.

Have you already booked your golfing trip for 2020?